Do you remember when... 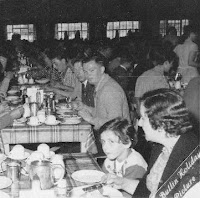 1950s holidays,
camps,
caravans
and communal eating
What I remember about our summer holiday in 1956:

A children’s theatre with puppets

A swimming pool with a tumbling waterfall

Music playing loudly all the time... especially first thing in the morning

A clown telling jokes while we ate three meals a day... all together in a very big canteen... with the same clown telling the same jokes... every mealtime

We were, as you’ve no doubt guessed, at Butlins in Skegness. It was the first ever holiday camp in the UK. It had been built in 1936 but because of the 2nd World War, it didn’t really get going as a holiday camp until the 1950s. The ethos was one of organised holiday fun... at least it was meant to be fun but the expression on my face in that picture makes you wonder.
Mum and Dad bought a caravan before the 1950s were out. It was a static one on a site in Ingoldmells. This was only minutes away from Skegness Butlins so very little changed. Our caravan had few amenities. We had to go on a short walk to a standpipe to get water and a longer walk to a toilet block for ‘comfort breaks’. I used to take myself to the toilet block in the middle of the night armed with only a torch and dressing gown. You wouldn’t let kids do that these days. Has it become more dangerous or are we more aware... or more paranoid?
I went back to Skegness Butlins in the 1970s when I had children of my own. The clown had gone and so had the massive communal canteen but there was still music playing. It wasn’t the loud rallying kind. I think it was Chi Mai also known as the theme tune from The Life and Times of David Lloyd George which you can listen to hear. [If I’ve remembered wrongly about the tune and you can remember what it was then please let me know!]
There are a lot of things that I can’t remember about the 1970s. It’s strange how memories work. The 1950s and 60s are clearer in my head than the 70s, except that the details are from a very small person’s perspective. If only I’d kept a writer’s notebook during the 1970s I’d have lots of rich material for article writing now. There’s a definite market in the UK for nostalgia articles. The Best of British are always interested in anything that might appeal to the older reader as are Yours Magazine. You can check out their submission guidelines here for The Best of British and here for Yours.
I just love those ‘Do you remember when...’ moments so if you have a favourite ‘Do you remember when...’ holiday moment I’d love to hear about it.
Posted by Rosalind Adam at 21:37