Old Spice - One sniff of this After Shave and I see kipper ties with matching patterned shirts!

O Memories:
Op-art -  I used to love this type of art. I knew nothing about it but appreciated the fun way it played around with my eyes. Bridget Riley, the artist who produced the middle picture of the examples below, is known by some as the 'mother' of op-art. [My heading of Os are showing off some examples of op-art.]

Outside games - Most of my time as a child was spent out in the street. We'd play hopscotch, ball games, hide and seek, circle games like 'The Farmer's in His Den'. Sometimes we'd sit on the kerb and talk or write down car numbers. A favourite game was skipping and there was always someone who had their Mum's old washing line that we could use. We'd have the rope stretched from one side of the road to the other. I don't remember cars bothering us very often and if they did we just stepped aside. We never argued or needed an adult to sort things out. We all knew the rules and we played by them... at least, that's how I remember it. 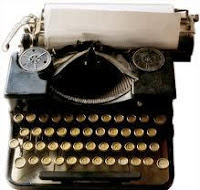 Office work - I worked as a secretary during the latter part of the 1960s. This was before the computer. Electric typewriters were a rarity and I don't think I'd ever seen a photocopier. If copies of a letter were needed we had to use sheets of carbon paper. When we made mistakes we put tiny pieces of paper in-between the carbon and the copy so we could rub out without making a mess. The only problem was I always forgot to take the bits of paper out and had gaps in my copies.


Did you think of any more Ns?