Digging for a King

The history beneath our feet never fails to fascinate me. Archaeologists from Leicester University are, as I type these words, digging up Leicester’s Grey Friars Car Park. A few days ago they found what they believe to be a section of wall from Grey Friars, a Franciscan Friary where it is thought that Richard III's body may have been buried. They are continuing the dig in the hope of finding his remains.

Richard III was killed at the Battle of Bosworth Field which is only a few miles from Leicester. Over the centuries there has been much speculation as to what happened to his body. Some say he was buried in Grey Friars. Others say his body was thrown into the River Soar. Now we may be about to find out the truth. 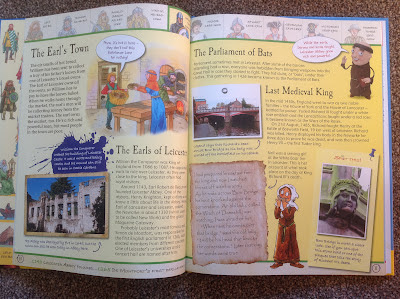 In my book, The Children’s History of Leicester, I talked about the Witch of Daneshill. They say that she was among the crowd who watched the King ride into battle on 21st August, 1485. Richard had stayed overnight in the White Boar Inn near Leicester’s River Soar. As he rode off over the river his foot knocked against the cornerstone of Bow Bridge. The Witch of Daneshill called out,

“When next he comes over that bridge it will be his head that knocks the cornerstone!”

They say that her prediction came true. His body was carried back, thrown across a horse, and his head knocked against that very same stone.

Bow Bridge is still there. It’s now part of a busy thoroughfare and only a few streets away from the archaeological dig. This area of ground has never before been excavated as it had been private gardens for many centuries and then a car park. I can’t wait to see what secrets it’s about to reveal.

Are there any historical mysteries beneath the ground in your area?

If you want to keep up with the news of the dig as it breaks then you can find the latest on The Leicester Mercury site.