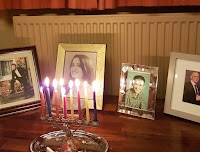 I was lead facilitator on the following two Heritage Lottery funded projects:

In 2009 I coordinated a memories project looking at the Leicester Jewish Community during the 1950s and 60s. You can see the website by clicking on the picture.

I coordinated the cataloguing of the Jewish section of Leicester Gilroes to provide a genealogical search facility. Subsequent research of a number of the headstones enabled us to record 'The Lives Behind the Stones'. 2014/15
You can see the website here:
Jewish-gilroes.org.uk