A few weeks ago I blogged about Belgrave Hall not far from the centre of Leicester and yet an area with a feel of the countryside about it. Next to Belgrave Hall is a church, St Peter's Church. It is now decommissioned, unused, locked up for most of the year and that made me sad.

I can see why it has been decommissioned. There was once a bustling community living in the area and I understand that a church without a congregation is not really a church. I stood looking at the priest's vestments, all laid out on display, brightly embroidered each with different coloured threads, labelled for the particular festivals for which each would be worn. They should have been washed, pressed and awaiting their turn at a service. They made me sad.

The building has been up for sale. It didn't sell. I walked around it after my visit to Belgrave Hall and tried to imagine flats where pews have stood for centuries. Who would live with the grand stained glass window that was once part of the chancel?

The chancel window on the left is not the window that gave this post its title.

I was far more interested in looking at a small side window. It's known as a leper's window or squint window. The sign in the church indicates that this window was installed in the Middle Ages so that priests could give Communion to the lepers as they travelled to Burton Lazars Leper Colony. Not for them the shelter and relative comfort of the pews or the beauty of the adornments. They had to stand in the churchyard, amongst reminders of their mortality. Who would incorporate this window into their lovely new flat? That thought really made me sad.

Burton Lazars is a village not far from Leicester. Inevitably there is no leper colony remaining, just the earthworks of the hospital which were uncovered in 2001 by the University of Leicester Archaeological Society. The hospital buildings were destroyed some hundred years after the Reformation but it had served the needs of lepers from the middle of the 12th century. It was founded by Roger de Mowbray and was said to be the largest leper colony in Europe. I knew nothing about it until I visited St Peter's Church and saw the window with its inscription. I apologise if the photograph is a little dark. It is in a tucked-away corner. I wonder what life might have been like for those lepers. I am determined to find out more about the lepers from Burton Lazars. 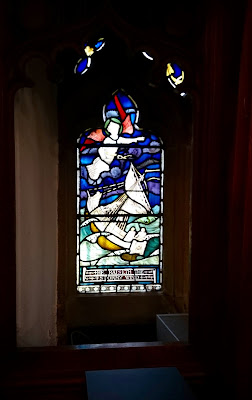 Inscription beside the window: Through this window the priest in the Middle Ages would give Communion and hear the confessions of lepers journeying to the leper colony at Burton Lazars, which was founded in 1135 by Roger de Mowbray. The stained glass is circa 19th Century

Research Footnote: I have started researching this at the local Records Office and am now wondering if this really was a window for lepers.
1.  The Church is unlikely to have been en route to the leper colony.
2.  Lepers would not have been welcomed where there was a large congregation.
3.  Confessions cannot appropriately be heard through an open window in a public place.
I am continuing to research this subject so, as they say, watch this space.